Texas has two species of green treefrog that are common in the eastern parts of the state.  One species is the well known Green Treefrog (Hyla cinerea) which is widespread across the eastern 40% of the state while the the other is the slightly smaller and less well known Squirrel Treefog (Hyla squirella) which has a more limited distribution in eastern Texas and along the coast. 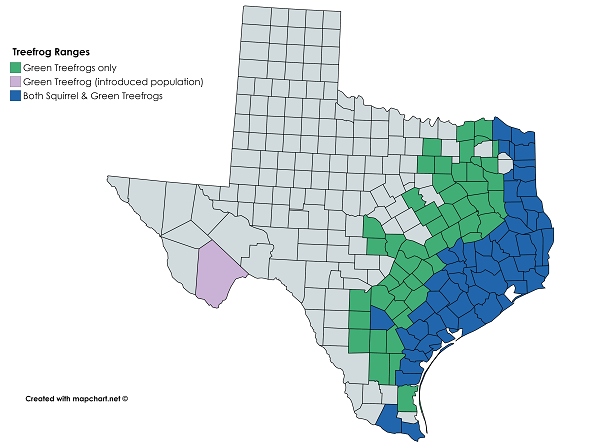 Where they overlap, the species can be confused.  Both species are bright green "treefrogs" with a white stripe on the upper lip and paler undersides.  Telling them apart can be hard to the first time observer and sometimes even the seasoned veteran.  The problem is that while Green Treefrogs have roughly the same color and pattern over much of their range, Squirrel Treefrogs can be colored like Green Treefrogs or they can be brown or tan and look nothing like them.

Their colors can also vary.  Both species are brighter colored when they are active and calling.  When not active, the Green Treefrog (Hyla cinerea) is a darker green color.  Some Hyla cinerea also have yellow or orange spots on their backs.
Actively calling Squirrel Treefrogs (H. squirella) are typically green, but when not calling they can be plain brown or gray or have faint mottled patterns on their backs. 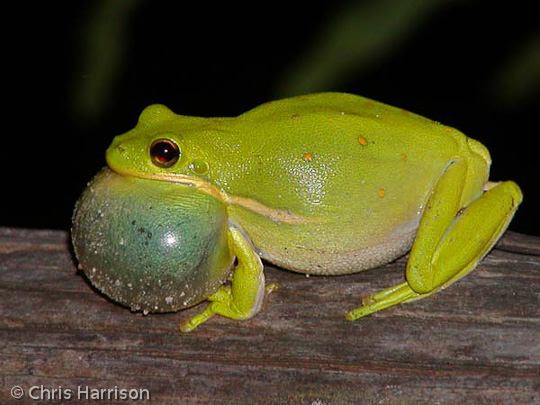 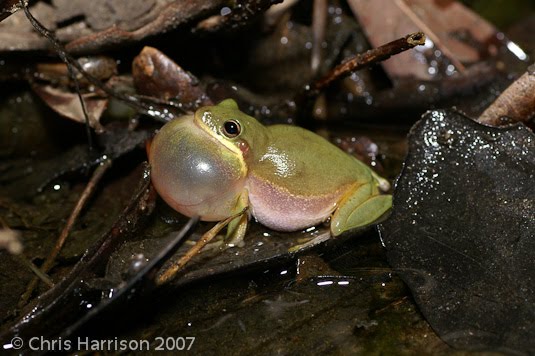 While both species can have a white stripe running from the upper lip and down the side of the body, in Green Treefrogs it is conspicuous on the side with clear borders.  In the Squirrel Treefrog, if that line is present it is much more jagged and indistinct.  That is evident in the two photos above.  The line does not necessarily have to go all they way down to the "hips".  Many of either species can have the line fade out halfway down the body, as seen in the Green Treefrog above.


Another character that can be helpful is that the Green Treefrog (H. cinerea) there is often green pigmentation below the white stripe whereas the Squirrel Treefrog appears to have to green stop at the white stripe.
In the following photo you get to see another character difference that sometimes helps separate the two species.  In the Green Treefrog (H. cinerea), the upper body is bright green (with or without yellow/orange spots).  In Squirrel Treefrogs (Hyla squirella), the upper side may be bright green, but there are often remnants of a darker spots, a dark mask or at least a dark "eardrum" (tympanic membrane).  In the green treefrog, the tympanum is usually green like the rest of the frog. 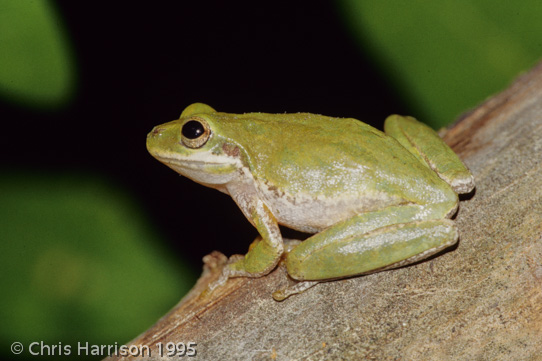 The Green Treefrog is noticeably larger than the Squirrel Treefrog, but that can be hard to determine when looking at a small Green Treefrog by itself.


When calling, the Green Treefrog is usually elevated from the ground a bit.  They call from up on vegetation, branches, tree trunks, fence posts, etc. over the water.  They are generally perched within 2-3 feet of the water.

But the sounds of their calls help distinguish them even at a distance.

The Squirrel Treefrog (H. squirella) has an almost duck-like quacking call.  When I lived in South Carolina, some local residents called this species the Rain Frog for its habit of calling during and after daytime rains.
Here is a Squirrel Treefrog duet from Bee County, Texas.

The Green Treefrog (H. cinerea) has more of a "honking" call.  I always think it sounds like they are saying "WRENK, WRENK, WRENK".   Here is a group of Green Treefrogs from Fayette County, Texas -

Here is a recording of the "quack" of a Squirrel Treefrog (H. squirella) followed immediately by the call of a Green Treefrog (H. cinerea).  This was recorded in a roadside ditch in West Orange, Texas.


It might be worth mentioning here that there are two other species of treefrog in Texas that can be "green".  These are the two species of Gray Treefrog (Hyla versicolor and Hyla chrysoscelis).  When they are green, they usually show some mottled "tree bark" type pattern - 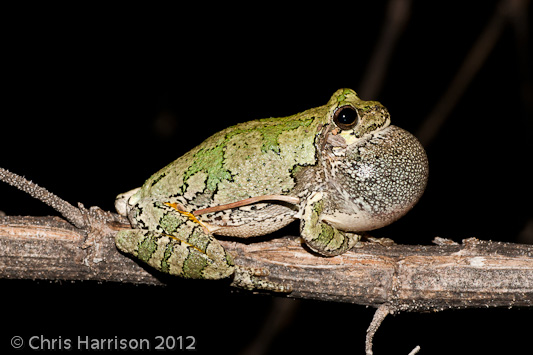 or even when they are mostly green, they show orange coloration on the thighs that helps distinguish them from our truly "green" tree frogs. 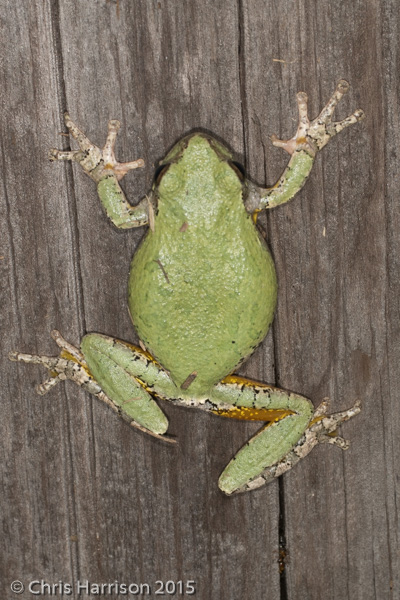