American Toad vs. Fowler's Toad
Anaxyrus americanus vs. A. fowleri

The two US toad species that are probably confused more than any others would have to be the American and Fowler's Toads (Anaxyrus americanus vs. Anaxyrus fowleri).

The problem is that they overlap in range across much of the eastern/northeastern half of the US and that they occupy much of the same habitats.   They are both highly variable in color pattern and there is significant overlap in their characteristics.  These two toads are confusing and difficult to tell apart even for experienced herpetologists (people who study reptiles and amphibians).

Making this matter even more confusing is the fact that the Fowler's Toads of southeast Texas are sometimes regarded as a different species (the East Texas Toad).  Furthermore, Fowler's Toad has previously been treated as the eastern "morph" of the widespread Woodhouse's Toad (Anaxyrus woodhousii).

So...how do you tell them apart?

One character that is often quoted in comparisons is the number of tubercles ("warts") in each of the dark spots on the back.  If it has only a single (or two) warts in each dark spot, it is probably an American Toad.   If it has three or more in some of the spots, it is probably Fowler's Toad.

In Fowler's (and Woodhouse's) Toads, the spur is usually missing and the parotoid gland bumps right up against the transverse part of the cranial ridge.  There is a nice diagram of this from the Frogs of Tennessee page here -
Toad head comparison diagram.

Another character that is sometimes mentioned is the color of the underside of the toad.   American Toad is whitish underneath while Fowler's Toad can have some dark spotting particularly near the throat and front limbs.

Yet another characteristic that is used to distinguish them is the size of the tubercles (warts) on the tibial part of the leg.  American Toad has prominent "warts" here while Fowler's are less noticeable and not larger than the rest of the leg tubercles.  I remember it as the American Toad has bigger warts on its calves than on its thighs.  In Fowler's, they are all the same size.

The Virginia Herpetological Society has a nice photographic comparison of these characters on this chart.

So by looking at the tibial warts, cranial crests, parotoid glands, belly coloration, and warts-per-spot on the back, you might be able to identify one of these toads to species.   But these variables are hard to see in some individuals and apparently vary between species as well!

Now, in Texas the American Toad has a very limited range so the area of possible overlap is fairly small.  These two species (and maybe Woodhouse's Toad) would only be expected to occur together in the counties of far NE Texas.  The area of overlap is not completely defined as the known range of the American Toad in Texas is rather spotty. 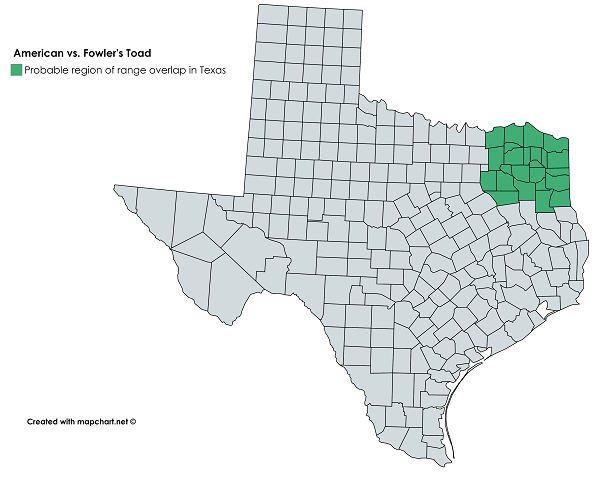 So the experts can sometimes have difficulty telling these species apart, so
1.  how do we tell them apart?
and
2.  how do we know they are two species?

Well, the answer to both of those questions is their calls.  Frog calls serve as reproductive isolating mechanisms.  They generally prevent species from interbreeding.  A female American Toad is not likely to be attracted to or approach a male Fowler's Toad because their calls sound so different.
Fortunately for us, we can also use these calls differences to identify which species of toad we are dealing with.

Both species have typical toad-like trilling calls.  The difference is the length and tone of the calls.  Fowler's (and Woodhouse's) Toads have short, buzzy, nasal  trills that rarely last more than 3-4 seconds.
American Toads have a similar trill that is "cleaner/prettier" and a little less nasal sounding and often last between 5 and 30 seconds or more.
Here's a spectrogram comparing the two call lengths (American Toad on top, Fowler's on the bottom).  You can see the American Toad trill continuing for almost 14 seconds while the Fowler's tapers off within 3 seconds.  You can also see that the Fowler's Toad call is "messier" on the Y axis (frequency axis).  This tells you the call will be buzzy rather than the clean almost single pitch call of the American Toad. 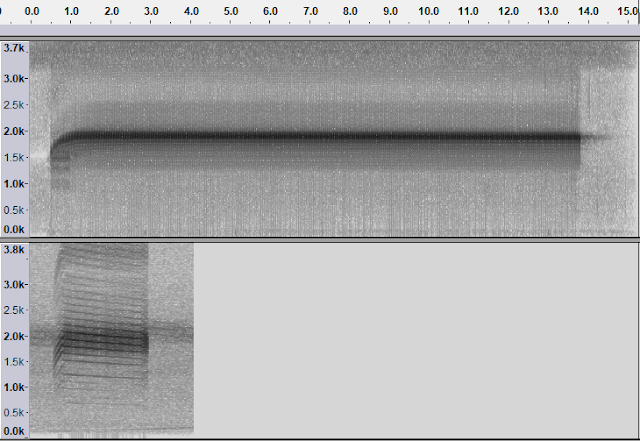 And here's what that difference sounds like.  These 15 second recordings include a single call by an American Toad while the same time period includes three calls of Fowler's Toads.  The difference is so obvious that in spite of their physical similarities, you aren't likely to confuse a calling American and Fowler's Toad.

First the long pretty, whistled trill of the American Toad:

then the short, buzzy, nasal trill of the Fowler's Toad.  :

Next year, I hope to be able to post an American Toad recording from Texas.